Meet the Honors College Student of the Month: October 2016 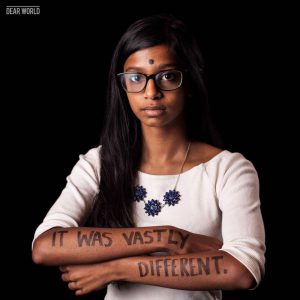 HC: What is the best piece of advice you’ve been given, and what advice do you have for other students?

RP: To be authentic. Allowing myself to be who I am and fighting for others to look beyond their preconceived notions about who I might be has been the single most important change in who I was when I was younger. Although sometimes it is still scary to be authentic, I find it has really made my life easier and so much more positive than it was beforehand. I want for other students, especially those with marginalized identities, to understand that being yourself can be absolutely terrifying, but it can also be so liberating. Find people who make you feel good to be authentic around. Find friends who are comfortable with you exploring yourself. Do whatever it takes to feel safe as your authentic self.

HC: How has getting involved on campus shaped your undergraduate experience?

RP: I feel safer! I feel more like I belong, like there are people who know who I am, and people who care about my future goals and what I am currently working on. Without getting involved, I would still feel isolated and alone. Instead, I have supports and so much experience. Although I would never consider myself a particularly confident individual, I am definitely more confident than I used to be. Getting involved has made me more willing to share parts of who I am and even apply to present at various conferences! I would have never done that before I got involved.

HC: What has been the most memorable moment of your RUC experience?

RP: This is a tough one, but I think it was last spring, when I attended the Student Leader Awards Ceremony. I thought I had been invited simply because I am a resident assistant and was just there to eat good food with really awesome people and leaders on our campus. Instead, I received an award! I was one of three students to be given a brand new award, Campus Change Agent. At that moment, I realized that I was actually making a positive change on our campus through various forms, including direct action protest but also just workshops and other events. It was really shocking to receive an award, but it is so memorable because it gave me the motivation to continue working to make this campus a safe one for all people.

HC: What is something people might be surprised to learn about you?

RP: I was involved in theatre productions and show choirs for over 8 years of my life! I performed in the musicals Seussical, Mulan, Alice in Wonderland, Rent, and a bunch of others as lead roles in each. It isn’t a life I revisit all that often, but it used to be my whole life.

RP: Wow, this is a tough one. The main thing I know I will be doing is fighting for positive changes so that LGBTQ people of color can feel safe and have their needs met. I don’t know if I will be doing this by working in a nonprofit organization, a higher education institution, or through community organizing, but I know that is what I’ll be doing somewhere!

Learn more about October’s Student of the Month: Radha Prabakaran